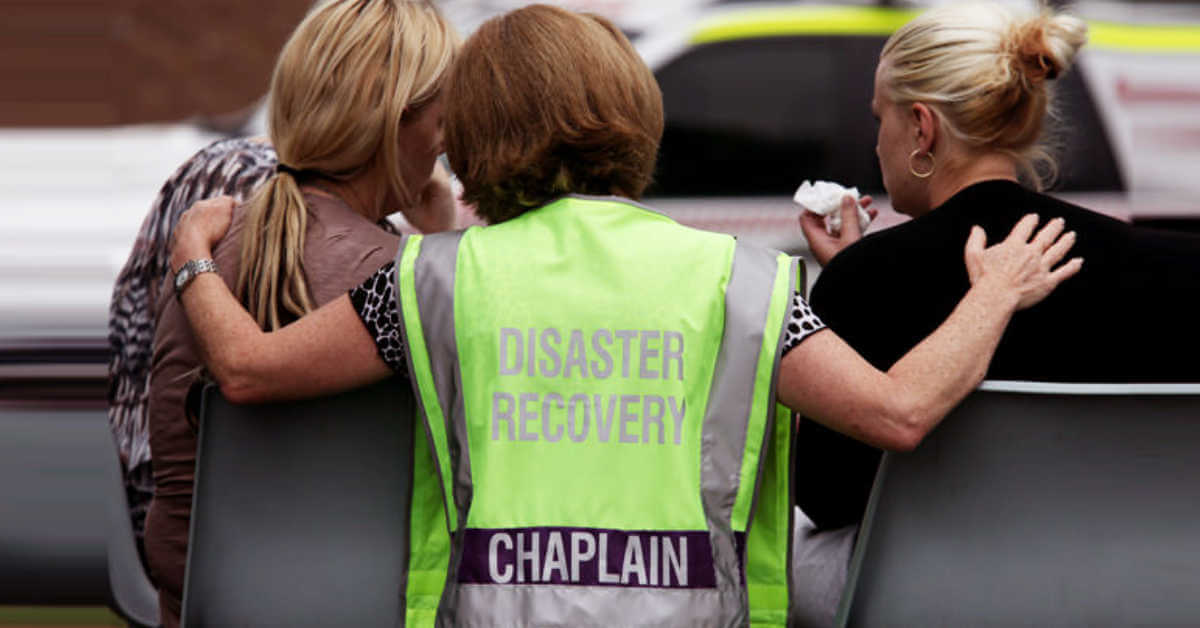 While emergency services and charities are responding to Australia’s relentless bushfire crisis in practical ways, there’s another army working quietly to meet peoples’ emotional and spiritual needs: the chaplains.

A constant presence in places like evacuation centres, chaplains are people of faith – mostly volunteers – who are equipped with the skills to support people in crisis.

In times of national emergency and disaster like this fire season, the organisation that heads the chaplaincy response is the Disaster Recovery Chaplaincy Network (DRCN) – an arm of the Uniting Churches of Australia.

Led by Reverend Stephen Robinson, it’s a network of chaplains from a wide range of Christian denominations and other faith groups, who are trained to help people affected by grief, loss, displacement and trauma.

One of their many partner organisations is Chaplaincy Australia: a ministry of the Australian Christian Churches, founded 21 years ago in response to the Port Arthur Massacre.

National director Ralph Estherby says around 40 of their 500 chaplains are currently deployed in bushfire response centres around the nation.

“A chaplain can be a friend, can be a support, can be a shoulder to cry on, or just someone to stand with them when in the midst of a crisis,” Ralph said. “And a lot of people are finding that very, very helpful.

“They’ll be deployed into evacuation centres, basically being a voice of calm and support for people who have been displaced because of this emergency. They’re able to work with people who have lost their homes; and in those terrible situations where a loved one has been lost, they’re able to offer grief and loss support.

“Really they are there to be a buffer zone for the other services such as the Red Cross and the Salvation Army, who provide very practical help.”

While emergency services like rural fire brigades have their own chaplains who care for their staff and volunteers, chaplains in the DRCN often end up being a support to charity workers too – who often become overwhelmed by the very great needs they are facing, and the intense emotions people are going through.

“When it comes to actually being able to handle very very strong reactions of grief, loss, anger, disappointment and confusion, it’s really important that we have people on the ground who’ve had prior training in those areas,” Ralph explained.

“Chaplains basically are able to handle that type of experience. We are well equipped to deal with some of those painful times that many people would just find completely overwhelming.”

Ralph described chaplains as a “middle ground” that sits somewhere between the simple support a friend can give, and professional mental health therapy. To make sure they are looked after themselves, disaster chaplains have a robust debriefing process they go through, to help them ‘decompress’ and reset back into the normal rhythm of life.

Spirituality in a Time of Crisis

While chaplains are people of faith themselves, naturally many of the people they are ministering to, will either have a different belief, or no faith at all.

Ralph stresses that chaplains aren’t there to push people to think or talk about religious or spiritual issues, if that’s not what they want.

“31 percent of Australians or so say they have no religion, but what I find is that in crisis many of those will either look to some type of faith or some type of belief to hold onto because everything is shaking all around them,” he said.

“Often, people will find talking to a chaplain who is a person of faith – even though they’re not talking about ‘faith things’ – they are able to get some comfort and support from that.”

“It needs to be said, these are not times that the chaplains in any way, at any time, would try to force their beliefs on anyone else. If faith is something they want to discuss, or they’re asking questions or wanting to gain assurance or support, the chaplain will go out of their way to help facilitate the individual’s faith needs – whether that is Christian, or whether its from another faith, or whether it’s a different denomination than they are.

“They will always seek to help the person find comfort in that which they believe—from their own worldview.”

Often people find it comforting simply knowing that a chaplain has a connection to God.

“The fact is that many people don’t have faith at all, and at times of stress and pain it becomes a very, very disturbing time for them,” Ralph explained. “So, often, they will find talking to a chaplain who is a person of faith – even though they’re not talking about ‘faith things’ – they are able to get some comfort and support from that.

“I’ve had many reports myself, as I’ve sat with people in extreme grief and loss, that the assistance we’ve offered, even though it seems only a small thing, has been greatly accepted.”

“The Law Shouldn’t Protect Us From Having Our Views Challenged”, Says Leading Barrister & Historian

Sow a seed of love today!

How To Make Millennials Work
Scroll to top