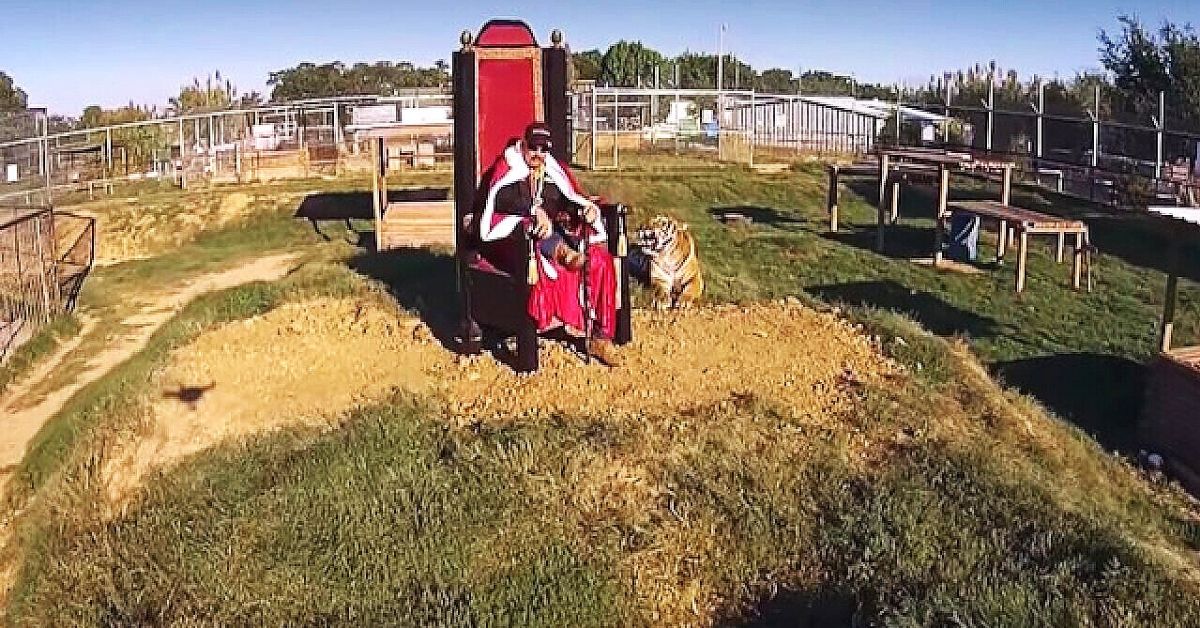 Tiger King is seven episodes of pure mayhem. Joe Exotic, the Tiger King, runs an exotic zoo with 187 cats, multiple love partners, and lots of guns. It’s hard to know what was his greatest crime. Was it animal cruelty? Paying a hired gun? Or the mullet?

At first, we rooted for Joe. Scorned by his father. Car accident survivor. Now finding validation by becoming king of his own little fiefdom.

One episode ends with this iconic moment. Joe sits upon a throne on top of a hill. The coronation is complete.

Viewers lap this up with glee. Schadenfreude abounds. Social media throws up a thousand memes.

This is self-righteous poverty entertainment at its gleeful best. Watching the rise and fall of white hillbilly trailer trash.

But I saw instead the tragic story of a sad man living the lie of Western exceptionalism.

After all, isn’t he free to do whatever makes him happy? If that means owning, breeding, and exploiting tiger cubs, then so be it. If you want to take this away, then he has every right to oppose you to the death.

But of course these freedoms end up making his world smaller and smaller. He becomes self-obsessed, self-deluded, and self-serving. His freedoms eventually lead to a physical prison cell. He’s still the king. But of a very tiny room by himself.

So how are we any different from Tiger King? Aren’t we playing off the same playbook?

We need trophies to validate us. Maybe it’s not a pet tiger. But it’s probably a career, a trophy family, an overseas holiday. They will consume just as much as a tiger does.

Just like Tiger King, we will find the throne to be a lonely place. There’s only room for one person there.

So how do we escape this? This is where Jesus breaks the cycle for us. He offers to sit on the throne in our place.

In Jesus, we find our validation, not by being the king. But by belonging to The King.

We can let go of our pet tigers. But the mullet can stay.

Article supplied with thanks to Espresso Theology.

About the Author: Sam is a theologian, preacher, author, evangelist, ethicist, cultural analyst and medical doctor.

Stormzy, Coldplay and Kanye Reached for the Light this Year. This Christmas, We Can Too

The Future of Shopping in a Post-Lockdown World

How Can Divorced Parents Get on The Same Page During COVID-19?

Is Your Daughter a Victim of Gaslighting?
Scroll to top