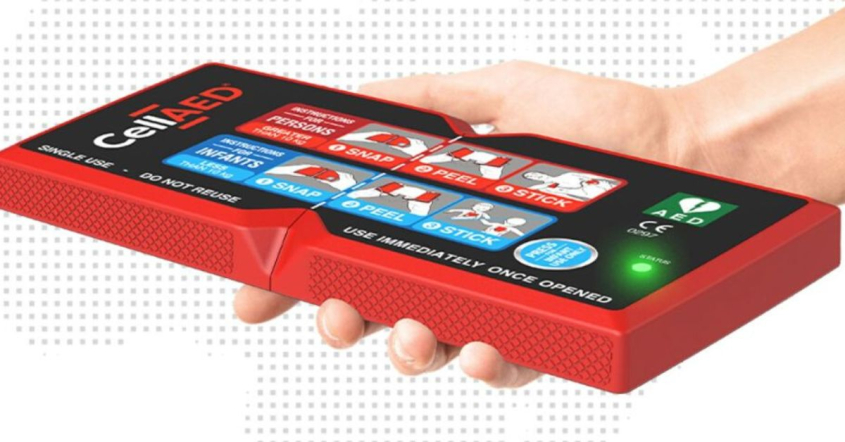 Though defibrillators are available in many public spaces, the majority of Australians have admitted they would not feel confident using the life-saving device, according to the Heart Foundation.

Now, the Australian company Rapid Response Revival has released an AED (automated external defibrillator) called the CellAED, which has been designed “to be deployed in seconds” during sudden cardiac arrest, with an easy-to-follow method.

According to the Heart Foundation, out-of-hospital cardiac arrest affect around 25,000 Australians each year, with a shockingly low 10 per cent survival rate.

That survival rate could be improved through the widespread use of AEDs, together with immediate CPR (cardiopulmonary resuscitation).

According to Health Direct, the device uses electricity to re-start the heart or “shock it back into its correct rhythm.”

The CellAED is a defibrillator that is not much bigger than a smart phone.

It involves a three-step action that anyone can deploy.

The CellAED, which is priced under $400, is designed to get AEDs into homes and neighbourhoods.

So how do you know when someone is suffering cardiac arrest?

“The best chances of surviving a cardiac arrest is when CPR is performed immediately,”

“Speed is the key. For every minute without treatment, a person’s chances of surviving a cardiac arrest drops 10 per cent.”

Mr Starr says that the best chances of surviving a cardiac arrest is when CPR is performed immediately, and the AED pads are attached to the patient’s bare chest “within a couple of minutes of the event”.

Emergency services should also be called immediately. Operators are trained to instruct the caller how to administer CPR, and deploy an AED.

An AED is designed to be used by people with no medical training whatsoever, and to be deployed quickly.

The CellAED involves a “snap, peel and stick” method.

“Snap the CellAED in half, peel the protective backing off the two halves – which form the pads – and stick the gel side of those pads to the bare chest in the positions shown on the device,” Mr Starr said.

The CellAED also provides voice prompts to guide CPR, “while automatically scanning to see if the heart requires a shock to help it resume its normal pumping rhythm,” explained Mr Starr.

“If that’s the case, it will tell the person performing CPR to stand clear before it applies a shock – and from there, repeating the process as necessary until an ambulance arrives.”

Around 80 per cent of sudden cardiac deaths occur in homes.

“We created CellAED so more households could afford an AED and made it small enough for people to carry around with them,” Mr Starr said.

“Our hope is that over time, none of us will ever be more than a minute away from our nearest AED.”

Jesus is Never in a Hurry

Why We Stockpile Toilet Paper!

You CAN be a Mother-in-Law Legend!

When You Can’t Unfriend…
Scroll to top