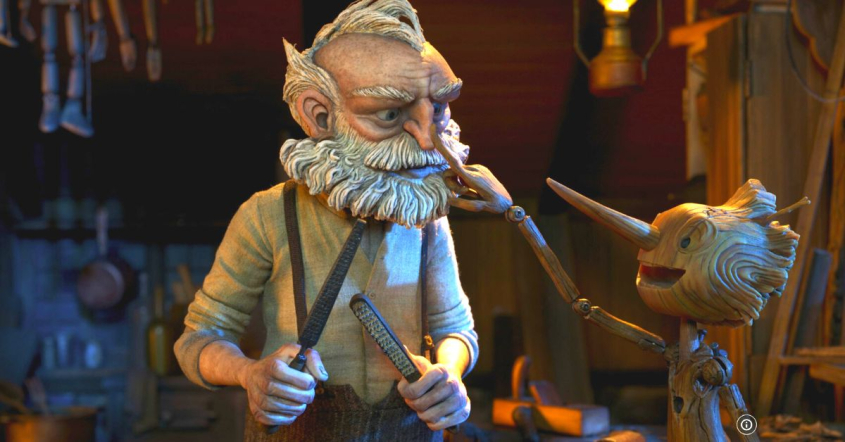 First published in 1883, The Adventures of Pinocchio is a children’s fantasy novel by Italian author Carlo Collodi.

This classic tale has gone on to be one of the most adapted and recognisable children’s fairytales of all time. The story has been adapted three times just in 2022 alone, and this latest animated offering may stand as one of the best ever put to screen. Legendary director Guillermo del Toro, the man behind the dark fantasies of Pan’s Labyrinth and The Shape of Water, has turned his talents towards animation and gives us this brilliant adaptation.

Following the recognisable beats of the story, Guillermo del Toro’s Pinocchio follows Italian wood carver Geppetto (David Bradley). After losing his 10-year-old son, Carlo, during a bombing in WW1 spends years grieving this loss until one day, he drunkenly carves a puppet replacement, whom he names Pinocchio (Gregory Mann). Brought to life by an angelic spirit (Tilda Swinton), Pinocchio is filled with naivety and abundant adolescence in the face of a difficult fascist Italy in the early days of WWII. This is when he begins his journey towards becoming a real boy, as he tries to be a good son to his Papa, and navigate those who wish to exploit him for their own gain.

Beautiful, breathtaking, and emotional, Guillermo del Toro’s Pinocchio is a masterful adaptation of the classic fairy tale that is familiar, and yet fresh. The director’s trademark dark fantasy breathes added depth and wonder into the story with his heartfelt father-son focus amidst fascist Italy allowing a genuinely new take on the tale. His dark fantasy lens works so well in stop-motion. Since this world crafted for and inhabited by Pinocchio is not too distant from our own, with an added level of magical wonder added for good measure.

Tears will likely flow in the opening and closing minutes and that’s a credit to del Toro as a storyteller and his earnestness. His ability to champion the misunderstood ‘monster’ means this story perfectly suits him, and it’s easy to applaud his additions to this adaptation. By setting this fairytale against the backdrop of fascist Italy circa-WWII, the film explores what it means to be “a real boy” and a “real Italian boy” in a nationalistic culture.

We see the wooden puppet challenge these expectations and his father’s efforts to protect him from war and being taken advantage of. David Bradley’s vocal performance as Gepetto is superb, and Ewan McGregor is great as Sebastian J. Cricket. The film is also filled with religious imagery from multi-eyed angels to a prominent crucifix in the town squares church. The animation is breathtaking in a wondrous, fantastical, beautiful effort. Add Alexandre Desplat’s woodwind/string instrument score as the icing on the cake to this mesmerising movie. Desplat has said he only utilised wood instruments, which is an additional level of creativity worth praising.

Reel Dialogue: What Does it Mean to Be a Good Son? 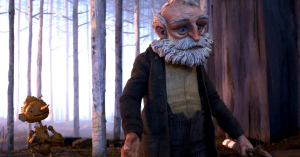 Whilst other Pinocchio renditions may focus on Pinocchio’s efforts to become a real human boy, this version focuses on the puppet’s journey to becoming a real son to Geppetto. A son who does not just take, but gives back and cares for the one who created him and provides for him. The focus is on the bond of family and the importance of community over individual priorities.

The Bible is filled with wisdom about how fathers are to raise their sons, mother’s to raise their daughters, and children to love their parents. And there is no better example of an obedient son, than Jesus. He obeyed His father to die on the Cross and rise again, to save all of the Father’s children whom He adopts.

Proverbs 1:8 “8 Hear, my son, your father’s instruction, and forsake not your mother’s teaching”

What Are You Worth? A Different View

The Centre of the Universe – Jesus
Scroll to top