If you’re talking classic coming-of-age sitcoms, you’ve got to mention The Wonder Years, which ran from 1988 to 1993.

The hilarious and often heart-wrenching show followed Kevin Arnold (Fred Savage) and his best friend Paul (Josh Saviano) as they grew up in the late ’60s and early ’70s.

Throughout the series, Kevin was navigating his love for the girl next door Winnie (Danica McKellar), and dealing with the older brother we loved to hate, Wayne (Jason Hervey).

Where are They Now?

Following The Wonder Years, Fred Savage guest-starred in a number of TV shows and movies. He also lent his voice to several animated shows, and has taken on several behind the scenes roles as well. Josh Saviano became a lawyer, but what happened to Winnie?

After Kevin and Winnie’s final summer, Danica McKellar went to UCLA and earned a bachelor’s degree in Mathematics. Armed with a passion for fractions, McKellar has written a whopping 11 books about maths that are aimed at encouraging absolutely everyone, but especially girls, to love maths.

“My main concern with the condition of mathematics in school is that there’s a lot of fear involved!” She said. “Math is not, generally speaking, presented in a fun way. The concepts, as I see them, ARE fun, and that’s the way I’d like to convey them myself.”

Now 46, the child-star-turned-matehmatician-mother homeschools her son Draco and during the pandemic she created a set of videos she posted on Instagram (@DanicaMcKellar) to help other parents.

She said about the videos, “I want to reach out to all of the parents thrown into home schooling these days. I really feel for them, It’s a situation I chose for myself, but it’s not easy, juggling everything.

“A lot of people ask me how I do it, how do I get the kids to sit down and focus? The videos are about things that work for me and my son.”

Danica is still acting as well! On television, the actress had a recurring role on The West Wing and has also appeared on How I Met Your Mother, The Big Bang Theory, and Dancing With the Stars. Always keen to champion smart girls and women, in 2015 Danica starred in Project Mc2 on Netflix, a comedy series about four girls using their knowledge of science to help save the world.

“It’s hard to describe why I love acting. I’ve always had two sides to my personality,” she said. “On the one hand I love logic and math and puzzles, and on the other, I just love to entertain people.”

Danica has also played the romantic lead in several Hallmark and GAC movies and now, watch her in GOOD premiere movie Wedding Bells, the story of commitment-phobic and busy professionals Molly and Nick (played by When Calls the Heart star Kavan Smith) who are asked to be the best man and maid of honour at their mutual friends wedding. When the wedding is put in danger, they must work together to plan the perfect day.

Article supplied with thanks to GOOD.

All images: TV and Movie Publicity

About the Author: Sharon Fitness is a movie buff, foodie, dog lover and TV fan.

Jeremy Camp’s Story of Faith Amid Heartbreak and Tragedy

Rolling With It: How Positive Language and Mindset Can Help You or Your Business Adapt to Change 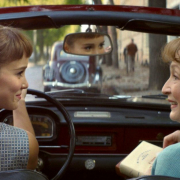 It’s Worth the Ride as ‘Mrs. Harris Goes to Paris’ [Movie Review]

5 Signs That It’s Time to Look for a Counsellor

When a Jewish Thought Leader Flies the Flag for Christianity

The Christian Origins of Halloween
Scroll to top