For centuries, dogs have been considered “man’s best friend.” They provide companionship and unconditional love that is often hard to find in human relationships.

The famous children’s books, published in the mid-1960s, told the story of Lyle, a city-dwelling, kind-hearted crocodile, and his adventures with the Primm family in New York City. This film, directed by the Blades of Glory team (Will Farrell on ice skates) and the same musical talents that brought you the Greatest Showman (Benj Pasek and Justin Paul) combined with the talents of Shawn Mendes to tell the story of Lyle the singing crocodile. He can not speak, yet, seems to understand English and can break out in song whenever the moment calls for it. It does not make sense, but kids twelve and under won’t care once Lyle breaks out in one of his many moderately catchy pop songs.

Our friendly croc is discovered by a struggling musician named Mr. Valenti, played with over-the-top gusto by Javier Bardem. It’s hard not to watch Bardem and sense Anton Chigurh (No Country for Old Men) brimming just beneath the surface of his forced grin and wheezing laughter, an unfortunate miscast. When Mr. Valenti must depart the city, he leaves behind his tiny, singing crocodile to fend for himself. As Lyle grows, a new family, the Primms, buys the home he occupies in the attic. 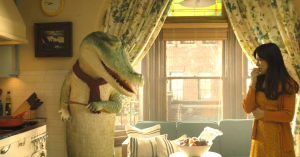 The Primm’s are new to New York City. Their son Josh, played with timid-sweetness by Winslow Fegley, has difficulty making friends. As he ventures into the attic, he bumps into the now fully-grown croc. Terrified, Josh does not know what to think. Will it eat him? The boy is terrified until Lyle breaks into song, and the two quickly become close friends. Lyle gives Josh the unconditional love he needs and the confidence he lacks to thrive in his new home. In fact, Lyle has a similar effect on everyone, even the most miserable of people, including the litigious downstairs neighbour, Mr. Grumps (Brett Gelman), and his grumpy CGI cat. 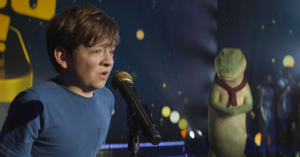 What is disappointing about this film is how average it feels. Especially since it capitalises on the music team that brought us The Greatest Showman, it lacks any song with “ear-worm” charm. The plot makes little sense, and the many contrivances are stupefying. Yet, none of that matters to the twelve-year-old in the next seat, leaning forward, tapping their foot, fully enraptured in Lyle’s happiness to everyone around him. They may also wonder if they could have a pet crocodile like Lyle, who might give them the same kind of unconditional love.

Reel Dialogue: The Love We All Long For 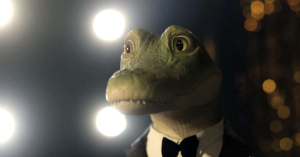 God the Father sent his one and only Son, whom he loved in eternity past, in perfect relationship within the Trinity. He gave his Son to us so that we might experience the same kind of love He enjoyed from eternity past. This was a gift we did not earn and certainly do not deserve, yet God offers it freely. We can be fully known and fully loved by the very God who made us. This is the message Jesus came to give us in the gospel of John. God offers this love even now.

About the author: Matt Townsend is the lead pastor of Harvest Bible Chapel,  Philadelphia. He is passionate about film and loves watching movies with his kids and dissecting their redemptive themes.

Daniel Craig’s ‘Knives Out’ Will Keep You Guessing – And Make You Look Inward, Too 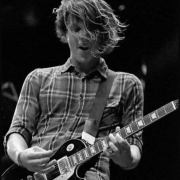 Drop the Notion of “Making It”, Says Musician-Turned-CEO Pete Gillies

The Fear of Leftovers (FOLO) is Gripping the Workplace

Remembering His Royal Highness The Prince Philip, Duke of Edinburgh

Be the Real You
Scroll to top