With a career that began when her mum suggested she go on American Idol, before becoming a solo artist, and now the frontwoman for girl-gang TRALA, Moriah Smallbone’s musical journey has been one of sweeping change and cultural defiance.

Her Idol days were short-lived, with the judges rejecting her wholesome image and devout moral values. But as that door closed, another opened. A man who’d seen Smallbone’s audition approached her and praised her conviction, introducing her to a woman in the music industry who could help out.

What was a ‘failed’ audition became the catalyst for Smallbone to develop her craft and release her first album, I Choose Jesus in 2012. Over the next few years her music was heard around the world, inspiring thousands with the Christian faith for which she’d been criticised.

Now Moriah’s focus is on her new all-girl band TRALA.

“I wanted to steer my creative energy toward working with other women,” said Smallbone. “As a recording artist from the time I moved to Nashville from Los Angeles… I’ve worked with some incredible men who’ve taught me so much, but because the music industry is kind of male-dominated, I was never set up to work with or write with very many women.

“I got a little ‘bee under my bonnet’… and just went on a search to try and find women to write with and work with, [and] I started to realise there are a lot of women in town who are excellent [at what they do] – but didn’t have an outlet to express it.”

In being able to work creatively with other women, Smallbone says the biggest difference has been how they communicate in the room.

“There’s more freedom for me to say… in the most natural ways, how I feel about something,” said Smallbone. “Whereas I sometimes feel like I have to filter what I say and what I talk about if there are gentlemen in the room.

“There’s also a really intense freedom of sharing emotion… So I will definitely say that I have cried way more in writing sessions with other women than I have with men,” she laughs.

“It’s not that one’s better than the other – because some days I go to writing sessions and I’m like, ‘I really don’t want to dive into the emotional depths of my soul today’… but sometimes it can be therapeutic.”

Marrying someone who also shares her values has been another hugely rewarding part of Moriah’s life, having said ‘I do’ to For King and Country’s Joel Smallbone in 2013.

“He didn’t make me feel silly over it”, Moriah said, of Joel’s respect for her wanting to save their first kiss for the wedding day. It was a decision she’d come to many years earlier in high school.

“There’s a really intense freedom of sharing emotion… So I will definitely say that I have cried way more in writing sessions with other women than I have with men.”

“It was a very practical and kind of fearful decision initially,” said Moriah. “[At school] the few guys that I did get close to – and in high school started pseudo-dating, were on this really fast physical train and quiet honestly, I was scared; I didn’t want to be taken advantage of.”

Attending a school of over 5000 in Southern Californian, Smallbone says she witnessed a number of teen pregnancies and dysfunctional romantic relationships, and “the whole ‘no kissing’ thing, was sort a defence mechanism that I was able to use to hold myself accountable for one, but to also kind of test the guy’s heart a bit [and see how] he responded to those boundaries.”

As a couple Moriah and Joel now seek to set their own new standards together.

“Also externally, how we present ourselves as a couple to the community around us – [Joel’s] taught me a lot about what it means to love people and respect people, and be gracious to people.”

Are Children on the Agenda?

Moriah and Joel have decided that if they do have kids one day, they’ll want to help them enjoy their innocence—but not be unaware of the culture around them.

“I think that it’s really admirable to take really active measures to go against the grain in your culture,” said Smallbone. “Where I grew up it was definitely not cool to go to church, or to try and have some form of a moral compass. There was a very small minority of kids that aimed to live that way. And it was hard, but I think there’s a value in doing something that’s not the norm.

“Maybe going against the grain is saying, ‘How do we get outside of the religious thinking, challenge the culture a bit, and create authentic connection with the divine?’”

“On the other side of the coin, I come out here to Nashville…and there’s 47 churches on Franklin Road alone. Maybe going against the grain looks different; maybe it’s saying, ‘How do we get outside of the religious thinking, and how do we challenge the culture a bit and create authentic connection with the divine?’”

TRALA’s self-titled EP is out now.

Listen to Laura’s full conversation with Moriah in the Power Lunch podcast below.

World Population Day Sunday July 11 – a Glimpse Into the Future 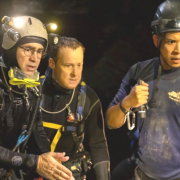 How I Would Have Handled the Resurrection

My 7 yr-old Only Eats Chips

What a Good Budget Looks Like
Scroll to top