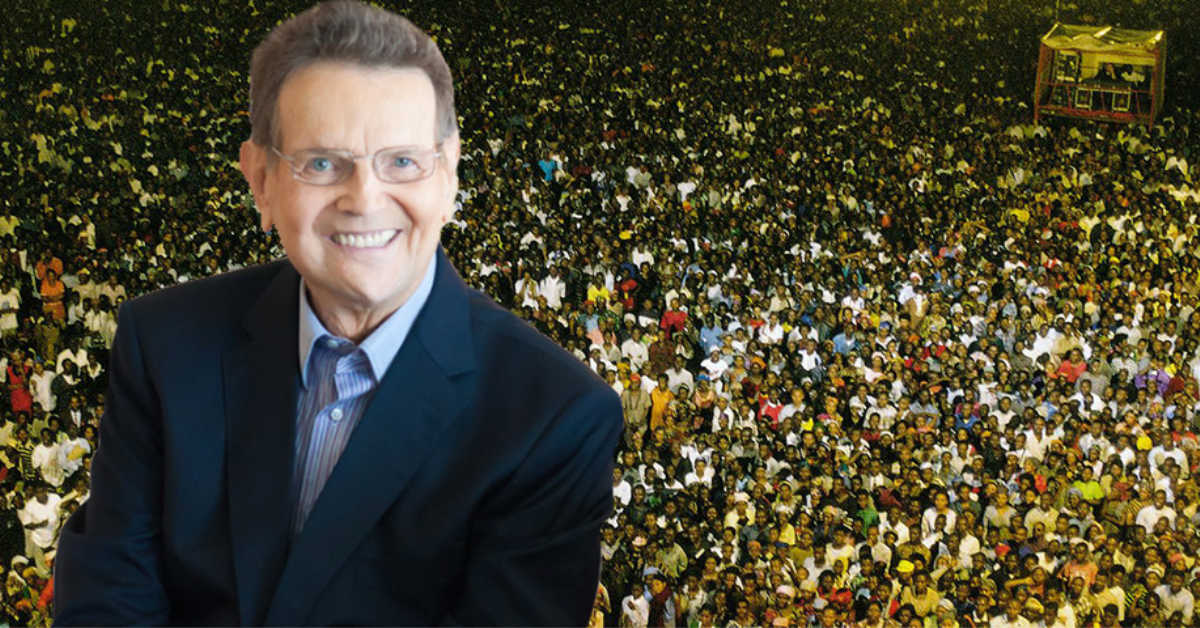 Renowned Christian evangelist Reinhard Bonnke, one of the most prolific missionary-preachers of the modern era, has died, aged 79.

Famous for his open-air gospel crusades that drew staggering crowds (up to 1.6 million people on one night alone), Bonnke spent 60 years preaching the Christian message – almost solely in Africa.

He passed away on Saturday, December 7, surrounded by family and friends.

Bonnke, described by some as ‘the Billy Graham of Africa’, was the founder of international missions organisation Christ For All Nations (CFAN). For decades he criss-crossed the African continent preaching the message of Jesus, as well as praying for the sick. It wasn’t unusual for his rallies to attract hundreds of thousands of people, gathered on up to 80 acres of open land – standing-room-only.

“Millions made commitments to faith, and miraculous signs such as physical healings were common.”

Millions made commitments to faith, and miraculous signs such as physical healings were common. Bonnke’s preaching emphasised the life and lordship of Jesus; repentance and salvation; the power and authority of God’s word; and the work of the Holy Spirit.

CFAN, which is now led by evangelist Daniel Kalenda, reports today that close to 79 million people have converted to Christian faith through their work since 1974.

In his last public photo (above) published on November 21 on his Facebook page, Bonnke and his wife Anni were celebrating their 55th wedding anniversary. In the photo Bonnke is missing his hair, a likely sign of cancer treatment, having never been bald in the past.

While Bonnke didn’t share details about his health publicly, the international evangelist Tiff Shuttlesworth said in a Tweet in 2016 that Bonnke was fighting throat cancer.

Bonnke’s death comes two years after his retirement from ministry. Before his last “farewell” crusade in 2017, the preacher hinted at the seriousness of his health battle:

“The last 6 months I had to go through a dark valley of sickness and underwent the necessary treatment… The Lord spoke to me, that I myself have to go back to Africa for one great opportunity to pass my burning torch to this generation…. Everything fell into place health wise. I am gaining strength rapidly. Soon you will hear the details of our Nigeria Gospel Campaign. If you ask me, I wished the whole world could come.”

An All-Consuming Love for Africa’s People

Born in Germany in 1940, Bonnke grew up the son of a naval officer and pastor. He decided to follow Christ at age 9 after a conversation with his mother, went on his first missions trip at age 10, studied theology in Wales, and began preaching in Germany where he met and married his wife Anni.

In 1967 at the age of 27 he began ministering in Lesotho, southern Africa, and it was there that he had a vision of “a blood-washed Africa” – symbolic of the blood of Jesus transforming millions of lives across the continent.

In the late ‘60s this was a seemingly impossible dream, at a time when Africans were often hostile to European influence. But Bonnke’s conviction kept him persevering and and would propel his ministry for the next five decades. In recent years, he began to develop a passion to see a similar spiritual awakening across Europe, too.

Bonnke’s ministry hasn’t been without controversy. Tragically in 1999, 16 people were crushed to death at the end of one of his crusades in Benin city, Nigeria, when the 500,000-strong crowd created a stampede as they began to leave.

Bonnke and CFAN have also been criticised for placing over-emphasising big events and crowd numbers. Bonnke was known, though, for his great love for the individual, and his organisation stresses that they place a premium on follow-up and discipleship, working with local churches to see people grow in their faith.

For one crusade in 2000, they spent $1.2 million on follow-up resources alone, and then-vice president Peter van den Berg told Christianity Today that disciple-making was the goal: “We have the attitude that the true value of evangelism is how many people end up in the local church.”

“A Great Loss to Africa and the World”, Says Nigerian President

At the time of Bonnke’s death on Saturday, the current head of CFAN Daniel Kolenda was leading a gospel crusade in Nigeria. He wrote over the weekend of how the crowd responded to the news:

“Tonight, when I informed the huge crowd about Evangelist Bonnke’s passing, they were visibly and audibly moved with emotion. Many of them can still remember when Reinhard Bonnke came to this same city more than a decade ago. The love for Bonnke in Africa is unparalleled. He left an indelible mark on this continent and we are still walking down the trail he forged over many years of faithful preaching of the Gospel… What an amazing and remarkable legacy of harvest he leaves behind.”

On CFAN’s website, Kolenda said he believed it wasn’t an exaggeration to say Bonnke’s work “transformed the continent” of Africa.

“Evangelist Bonnke drew some of the largest live audiences in history. In November of 2000, at a single meeting in Lagos, Nigeria, 1.6 million attendees heard him preach the truth of salvation through faith in Jesus Christ. From big cities to the bush, in deserts, jungles and savannahs, similar crowds assembled in almost every nation in Africa.

“The creative work of the Holy Spirit dissipated cancers, opened blind eyes, reset broken minds and shook the Church to once again believe for the “greater works” promised by Jesus Himself.”

“It wasn’t Reinhard Bonnke’s speaking alone that drew the masses. The multi-day events were always marked by the miracle-working power of God. From the start of his ministry in 1967 to his last gospel campaign in 2017, thousands upon thousands were healed. The creative work of the Holy Spirit dissipated cancers, opened blind eyes, reset broken minds and shook the Church to once again believe for the “greater works” promised by Jesus Himself.

“Those who knew him off-stage can testify to his personal integrity, genuine kindness and overflowing love for the Lord. His ministry was inspired and sustained by his rich prayer life, his deep understanding of the Word and his unceasing intimacy with the Holy Spirit.”

Nigerian President Muhammadu Buhari, who is a Muslim, joined Christians in mourning Bonnke’s death, describing it as “a great loss to Nigeria, Africa and the entire world” according to a presidential Tweet.

Do You Know God, or Just Know About Him?

Do You Struggle to Find Your Worth in Jesus?

Mum Thanks God for Her Daughter’s Miracle

Daniel Craig’s ‘Knives Out’ Will Keep You Guessing – And Make You Look...