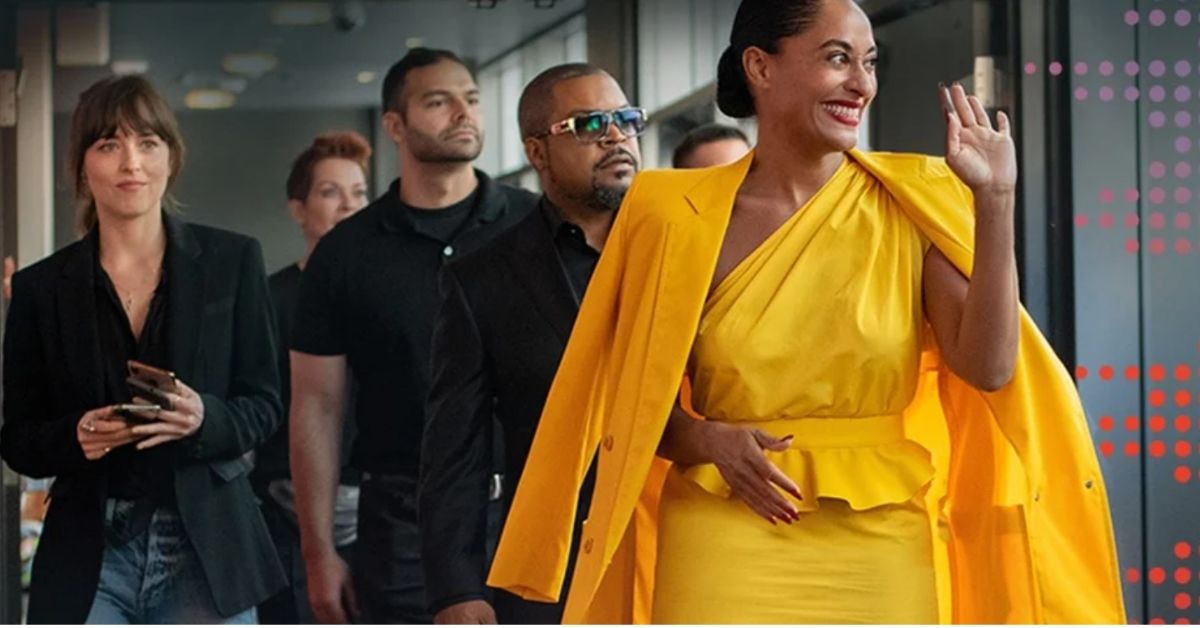 Tales of trying to achieve your dreams and living in LA or NYC go hand-in-hand in many movies. But, where other films are about personal achievement and reputation, The High Note is about growth and standing your ground.

From director Nisha Ganatra (Late Night), in The High Note, superstar Grace Davis (Tracee Ellis Ross) is a living legend in the music scene, relishing in the diva lifestyle she’s become accustomed to after decades of topping the charts. Her overworked assistant Maggie (Dakota Johnson) has aspirations of being a music producer, and when Grace comes to a career crossroad, the pair become unlikely allies as their professional futures hang in the balance.

Set in LA and featuring ‘a girl with big dreams’ in Maggie, The High Note could easily be written-off as another fairytale story of making it big in the big city, and having your talents uncovered as your career fantasies come true.

For sure, as the industry upstart, Maggie wants to do more than get Grace coffee and help her decide what clothes “spark joy”, but The High Note is less about getting your dream job and more about risks and reinvention.

Maggie has the talent as a producer (albeit, from her bedroom), and an encyclopaedic knowledge of music that only really cool kids could match – she’s just got to decide if she’ll muster up the courage to put both to use. And, in a sweet dose of realism, Maggie’s not allowed to be the young know-it-all-hero, saving the old guard from outdated industry practices. She gets her fair share of comeuppance when her ambition oversteps the mark and she misreads situations because she hasn’t been in the room long enough.

Grace is at a stage in her life and career where she can either stick with what she knows and ride on past success, or be brave enough to try something new, knowing “only five women over 40 have ever had a number one hit, and only one of them is black”. Said in an emotionally heated moment between Grace and the ever-hopeful Maggie, these words bare the heart of The High Note.

The movie tries to capture that tension between the despondent pressures of the world, and the possibility and life we still feel inside. Grace can be – and wants to be – more than what she’s being limited to.

Tracee Ellis Ross brings an endearing believability to Grace’s predicament, perhaps because as the daughter of Diana Ross she’s seen the industries faults up close. Or maybe, because at 47, she has her professional singing debut in The High Note.

Tracee told The Sydney Morning Herald, “Honestly, [recording] was a childhood dream of mine and my mom knew I could sing. Every 10 years or so, she would make a little comment like, ‘It’s time to record now, don’t you think?’”

“I just always kind of ignored her, maybe because it felt daunting having an extraordinary mother who is known for her singing voice. But then I got busy with the rest of my career and was doing really well so I wasn’t thinking about it. I guess I was just waiting until this perfect project helped me walk into that dream again,” Tracee said.

If anyone in the cast could know how Grace would be feeling, surely it’s Tracee.

Interestingly though, hers isn’t the main voice you’ll admire in The High Note, with Maggie’s personal life introducing you to David Cliff (Kelvin Harrilson Jr.) – a soulful singer who Maggie meets over organic apples, of course, and who she practices her producing prowess on while the two make eyes at each other (the requisite love interest).

Although their relationship isn’t the main aim of the movie, David’s singing does steal the show, and adds a layer to The High Note where it could otherwise be lacking.

The High Note is a very easy watch, if not a little drawn out, and offers an inoffensive option for viewers ready to get back to the movies.

The High Note is in cinemas now. Rated M

Navigating Your Teen’s Quest For Independence

Inside Bitcoin: A Beginner’s Guide to the World’s Favourite – and Most Mysterious – Digital Currency