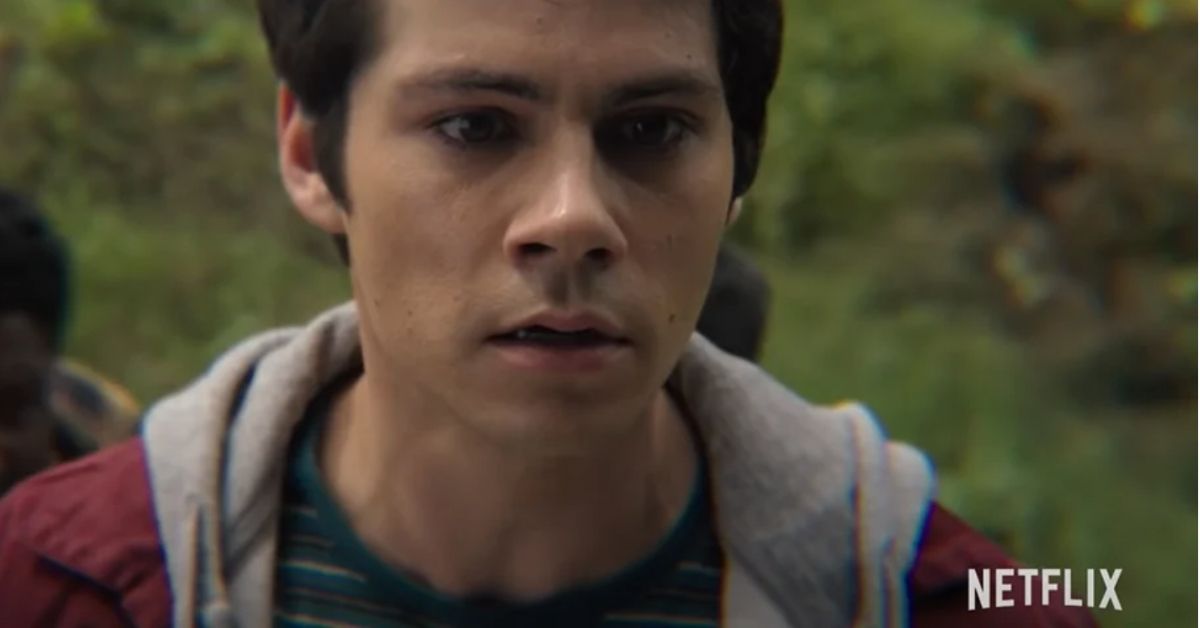 We need to address the elephant in the room before you see Love and Monsters – watching an end-of-the world movie is different now.

We’re living through a pandemic that mirrors the plotline of many disaster movies, so where we once brushed off their far-fetched theories and could suspend our disbelief, now, we’re a little bit too aware that anything is possible.

Love and Monsters may be about an asteroid that comes to earth and the retaliating rockets that send monster-making chemicals into the atmosphere – a one-time ridiculous premise – but maybe… just maybe… this could actually happen. And it’s filmed in Australia (doubling for California) so thanks for making it hit close to home.

Dylan O’Brien (Teen Wolf, Maze Runner) plays Joel, an orphaned survivor of the attack who’s found a home among a subterranean colony of coupled-up housemates. He’s valued by the crew, but sidelined to cooking and maintenance duties due to his extreme lack of courage and combat skills.

The outside world is filled with everyday creatures like snails, crabs and beetles, who’ve turned into oversized people-eaters who dominate the landscape, making underground living the only way to survive.

One day Joel’s bunker is breached, and together with learning his pre-attack girlfriend Aimee survived the event, he decides he can’t sit on the bench any longer, and must leave the bunker, learn to fight and find her.

Now, you need to know these monsters have been so well created that Australian visual effects designer Genevieve Camilleri was nominated for an Oscar for their creation. Yes, she deserves big congratulations, but also all the blame for your shudders and general feelings of icky-ness.

The seven-day journey Joel embarks on to find Aimee, shows what Love and Monsters is really about: being a post-apocalyptic movie with heart.

Much like Warm Bodies or a PG version of Zombieland, it’s not here to horrify you, but make you squirm, laugh and enjoy the journey of someone rising to the challenge of the circumstance.

Back at the colony, Joel was labelled the “freezer” who baulks at the sight of danger, and it started to weigh on him that he couldn’t contribute in the same ways everybody else was and felt less than because of it.

Joel’s choice to brave the outside world becomes a proving ground to discover who he could be beyond the confines of the camp, and whether that label is something he’ll outgrow.

Also, being the only single in the camp makes Joel feel misplaced, but Love and Monsters uses that to drive home the meaning of true family, connection and identity beyond coupledom – it’s not a problem to fix. The love in Love and Monsters is an expansive one.

Most importantly, the movie features a very cute kelpie pup name Boy, who is actually the star of the show because, really, can anyone survive an apocalypse without an intuitive best friend by their side?

Love and Monsters is an accessible, fun and thoughtful choice for the family. It’s got enough scare to entertain the tweens and teens, but also offers some deeper commentary on identity, courage and how to keep your humanity when the world’s losing its mind. Or at least being overrun by juiced-up amphibians.

Love and Monsters is rated PG and streaming on Netflix now.

Greater Female Labour Force Participation Than Ever Before

How Schools are Designing Classrooms for the Future

Where Will You Shop in the Retail World of Tomorrow?